I had to set down the tatting shuttles for a while as I’m really not getting anywhere with it (but I’m not giving up! After all, it took me nearly 3 years to teach myself to crochet ’cause I kept getting frustrated with it, but I just couldn’t stay away forever!! And tatting is just to beautiful to give up on!!) But to occupy myself in the meantime, I decided to do something I’ve loved since I was a small child (I’m sure the title of this post gives it away ;)), drawing is so much fun and it’s easy to learn right off the internet for free!
Interweave's "Artist Daily" site has a selection of free downloads that include Drawing Basics, Oil Painting Techniques, and Watercolor Instruction, Wikihow also has a good selection of drawing “how-to’s” including how to
Draw a Medieval Castle which I used this evening to learn how to draw the picture below. For the moment I’m concentrating on sketching and having a lot of fun with it but I may branch out into painting eventually. 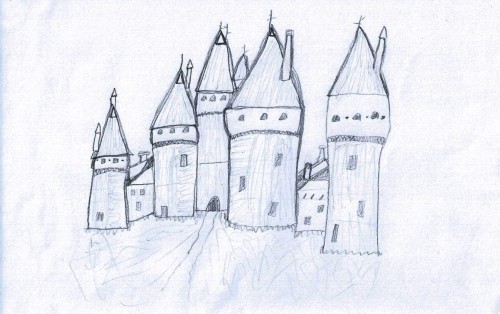 I finally figured out how to wind a shuttle!! Now I just have to figure out how to actually start tatting 🙂 not to sure how easy that’s going to be but I’m going to watch my dvd in a few days to see how they hold the shuttle because at the moment I’m not sure I’m doing it right, I expect something new like this to feel awkward (like when I was learning to hold a crochet hook) but at the moment I can’t hardly move my fingers and I doubt that’s right.
My book says to have on hand for learning: two different colors of size 10 thread and one color of size 5 thread, it also has a few projects to use for practice such as a bookmark, a lace edging for a hanky and a few doilies which all means I’m set for a winter of learning a LOT (I hope) about lace-making.

I have my shuttle, thread, book and dvd (plus a great forum chock-full of helpful people) so hopefully in the next few weeks I’ll have at least figured out how to thread (or wind, I’m not sure which it is called) the shuttle!! (figuring out the proper names for things would be good too ;))

The history of tatting is fascinating which is why I’ve included a short overview:

The actual beginning is lost but many people believe that tatting started as decorative work made from ropes by sailors for their wives/girlfriends (possibly supported by the fact that some decorative ropework found on ships include techniques that show a pronounced resemblance to tatting) However it started, all of the available evidence points to it originating in the early 1800’s and from there it gained in popularity and in the early 1900’s became an art form that flourished as it was relatively cheap to make even the fanciest lace that could be used for pretty little collars and cuffs, unfortunately as more modern looks began to take root tatting lost it’s rather large following and even more so when machine-made lace turned up in markets but there are still people all over the world who tat and encourage other’s to learn the lovely art form.